There are various ways you can help Defend WikiLeaks and help support Julian Assange from ongoing persecution.

You can donate to the Defence Fund here. You can also donate to our fundraising appeals:

WikiLeaks is entirely funded by its readers and is being challenged by multi-million dollar corporations. We rely on supporters like you to help. Please share this campaign widely.

Julian Assange and WikiLeaks are the subject of regular false claims and smears in the media – a consequence of challenging the powerful. Media outlets which should support truthtellers often choose to side with powerful interests seeking to undermine WikiLeaks and the public’s right to know. A common smear has become to falsely link Julian Assange and WikiLeaks to Russia, when no links exist. You can write to media outlets and individual journalists who report false news, pointing out the truth. You can use individual newspapers’ complaint mechanisms to challenge editors and press them to issue apologies and retractions. You can use your online, social media presence to inform others about false media reporting. 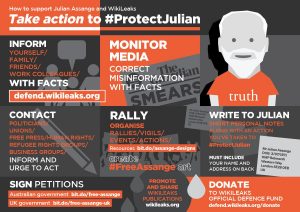 Write to your political representative

You can write to your member of parliament, Congressman or Senator or Prime Minister asking them to condemn Julian Assange’s arrest and oppose the attempt by the US government to extradite him from the United Kingdom.

Write to a human rights organisation and union

Print your own banners, posters, flyers, stickers and badges/buttons to support Julian Assange and Chelsea Manning with free, print-ready designs from Somerset Bean.