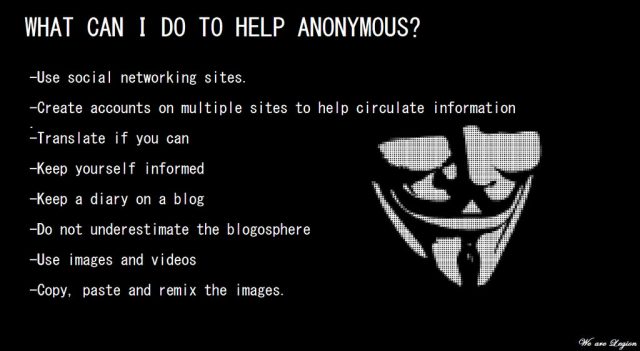 There are many theories about us. That we’re anarchists, kids, crazy film-buffs that saw one too many superhero movies. The truth is, we are all these things. Anonymous is a symbol, like the flag a country flies. The flag is the symbol of the country. Our masks are our national identity. We are not Anonymous – we represent the ideals of Anonymous. Truth, freedom and the removal of censorship. Like any symbol, we affix it wherever we go, as you have seen from street protests. We have no leaders, civilians or soldiers. We are all one.

We run operations because that is what the group decides to do. We choose targets because that is what the people who represent the ideals of Anonymous want to fight for. As a random example, the nation Nepal is in trouble. We see it every day – war, poverty, murder. Every day we are bombarded with news and images, as we sit at home safe in the knowledge that we are powerless, that “better” minds are dealing with the situation. In today’s world we are seen as terrorists or at best dangerous anarchists. We’re called “cowards” and “posers” for hiding behind masks, but who is the real poser? We take away the face and leave only the message.

Behind the mask we could be anyone, which is why we are judged by what we say and do, not who we are or what we have. We exist without nationality, skin colour or religious bias. You wage wars, lie to us and try to make us believe it’s for our own good. Yet we’re the criminals? Today, technology is everywhere, in banks and ATMs, TVs and games consoles, streetlights and hospitals. Computers rule the modern world. Yet most people who use computers every day don’t know what they’re doing. You use a computer like it’s a toy, a pet. You feed and play with it but the second anything goes wrong, it’s off to the vet. This wouldn’t matter so much if it wasn’t for the fact that your pet is responsible for the lives of at least 20 other people. We are not computer hackers. We are not protesters. We are not criminals. We are your mothers and fathers, brothers and sisters, next-door neighbours. We are anyone and everyone who is pissed off and wants to do something about it.

What are you doing to help make the world a better place?